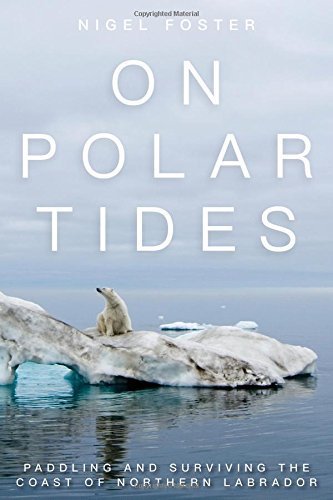 On Polar Tides: Paddling and Surviving the Coast of Northern Labrador (Englisch)

In 1981, Nigel Foster flew to Canadas Baffin Island to begin a solo kayak trip south toward northern Labrador. After crossing the 40-mile wide Hudson Strait in howling winds and fighting a 10 knot tide race, Foster crash-landed on a small island in the dark. He had frostbitten fingers and was 300 miles from the closest village. With unimaginable good fortune, eight days later he ran across an oil tanker and hitched a ride south. He had survivedmarking one of the most notable solo crossings in historybut the failure of the second portion of the trip he had originally planned haunted him. In 2004, Foster returned to northern Labrador with his then girlfriend (now wife) Kristin Nelson. Launching from Kuujjuaq in Northern Quebec, the couple paddled the Ungava Bay coastwhich has one of the largest tidal variances in the worldto the place Foster had boarded the oil tanker 23 years earlier. From this remote location, the couple completed the trip to Nain that Foster originally planned for 1981. They encountered more polar bears than people. The story of the two trips forms the backbone for On Polar TidesOriginally self-published asStepping Stones in 2009which offers an intimate and insightful view of Ungava and Labrador. The new, revised edition will be edited and rewritten to include more immediate dialoguedeveloping Nigel and Kristins characters more fullyand will include color photos from the trip throughout.

Nigel Foster is a world-renowned kayaker and an accomplished author. Considered one of the most charismatic and talented instructors on the planet, his lectures and classes attract large audiences of kayakers at all levels and all over the world. The author of several kayaking books and guides, and many articles on paddling, he also designs kayaks and kayaking gear. Nigels other books with Globe Pequot areNigel Fosters Sea Kayaking, (1997) Nigel Fosters Surf Kayaking (1998) and Encounters from a Kayak, (2012)
Through years of paddling all over the world, Foster has developed an eye for identifying what is unique and special about individual paddling areas, and through his years of guiding groups in Wales, Scotland and farther afield, he has developed an uncanny appreciation for what paddlers of all experience levels will enjoy.