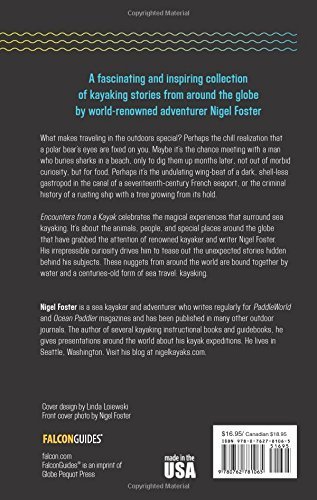 Encounters from a Kayak (Englisch)

What makes travel special? Perhaps the chill realization that a polar bear's eyes are fixed on you. Maybe it is the chance meeting with a man who buries sharks in a beach, only to dig them up months later, not out of morbid curiosity, but for food. Perhaps it is the undulating wing-beat of a dark shell-less gastropod in the canal of a 17th Century French sea port, or the criminal history of a rusting ship with a tree growing from its hold.
Encounters in a Kayak brings the reader along on the magical experiences that surround sea kayaking. Its about the animals, people, and special places around the globe that have grabbed the attention of renowned kayaker and writer Nigel Foster. His irrepressible curiosity drives him to tease out the unexpected stories hidden behind his subjects. These nuggets from around the world are bound together by water and a centuries-old form of sea travel: kayak. The result is a book of broad appeal for those interested in kayaking, traveling, and adventure.

Nigel Foster is a world-renowned kayaker and an accomplished author. Considered one of the most charismatic and talented instructors on the planet, his lectures and classes attract large audiences of kayakers at all levels and all over the world. The author of several kayaking books and guides, and many articles on paddling, he also designs kayaks and kayaking gear. Nigels other books with Globe Pequot areNigel Fosters Sea Kayaking, (1997) Nigel Fosters Surf Kayaking (1998) and Encounters from a Kayak, (2012)
Through years of paddling all over the world, Foster has developed an eye for identifying what is unique and special about individual paddling areas, and through his years of guiding groups in Wales, Scotland and farther afield, he has developed an uncanny appreciation for what paddlers of all experience levels will enjoy.